This is one of those posts that took me approximately one million years to write. It’s a post about starting Solly on medical cannabis, a subject that I’m still on the cusp of beginning to understand even though I’ve researched it for years. Before I begin the post, it’s important for me to note that, despite the stigma around marijuana, cannabis is a powerful medicine for many ailments, especially some of the challenges associated with pediatric stroke and cerebral palsy. Because each compound produced by the plant, or cannabinoid, can be used medically and in conjunction with other cannabinoids, and treatment for each person can vary widely, I highly recommend teaming with a doctor who understands how each cannabinoid can be used within a specific population. This is our story of how we’re getting started with medical cannabis under the guidance of a well-respected, very experienced doctor.

If you follow me on Instagram or Facebook, chances are you’ve seen a few recent posts about Solly’s rapidly emerging expressive speech. After struggling to communicate with him for 5 years, I can’t even begin to put into words the impact this development has on our lives and how beyond excited we are that we’re starting to better understand Solly’s wants and needs.

Here’s one of the videos I shared earlier this year:

Most of Solly’s bilateral brain damage is in the left hemisphere where, in a typical brain, much of the speech center is located. There is quite a bit of research that indicates that if one side of the brain is impacted by stroke in childhood, the other side of the brain will rewire to take over these capabilities (here’s one publication with more details), but because Solly’s brain damage is extensive and widespread on both sides of the brain, we weren’t sure that would ever be the case.

As we’ve tried alternative therapies and procedures over the years – mainly hyperbaric oxygen therapy and stem cell therapy – in combination with traditional speech therapy, we’ve seen big gains in cognition and receptive speech and some small gains in expressive speech. While we’ve always been adamant that Solly’s cognition is right on track, his expressive speech has lagged significantly and everything we’ve done in the past has helped him in little spurts, but no huge gains. That is, not until lately.

One of the reasons we chose to move to California was to gain access to medical cannabis. Medical cannabis is widely known to help epilepsy patients struggling to control seizures as well as patients dealing with ongoing pain. But it has more benefits than just seizure control and pain management: it’s also used as an anti-inflammatory, anti-anxiety, anti-depressent, anti-spasmodic, and much more. (For those who are interested, here’s a fairly in-depth chart with an overview of the benefits of each major cannabinoid.)

We’ve actually been dabbling in CBD, cannabidiol, since 2017, but never with medical guidance. In fact, while our doctors in Nashville weren’t against the use of CBD, they weren’t exactly for it either. CBD, one of many cannabinoids derived from the cannabis plant, is legally available in all 50 states as long as it has less than 0.3% THC in it. However, because of the stigma attached to cannabis and decades of reliance on pharmaceutical medications, there are few pediatric doctors well-versed enough in its usage to properly dose and guide families wanting to try it, particularly in those states where medical cannabis is still not legal. In short, aside from some support groups on Facebook, many families are on their own. Three years ago, we ordered and tried a handful of CBD products for Solly and settled on one, Haleigh’s Hope, mostly because they openly provide lab reports on all products and because we figured it couldn’t hurt to try it. Our intentions were there, we knew cannabis worked well for some CP patients, and we’d done enough research to know it was safe. We hopped on their standard recommended dose for CP of 0.3 ml three times a day and that was that. We didn’t really see any changes, but kept him on it “just in case.”

Fast forward to the move to California. While chatting with another Mom one day at NAPA Center, she brought up a doctor, Dr. Goldstein at Canna Centers, who specializes in medical cannabis for pediatric patients and who is located nearby in Hawthorne, CA. We immediately submitted all required materials to get on the wait list to see her.

In mid-March, coincidentally the same day California mandated its stay-at-home order, Solly and I sat in Dr. Goldstein’s office for an appointment to get started with medical cannabis. I provided Solly’s medical history and walked Dr. Goldstein through each of our areas of concern in Solly’s development. Specifically, we are looking for: help with executive functioning, like focus, calming his body, playing with toys, having a quicker response times; help with behavior and sensory-seeking behaviors, like chewing on inappropriate items and himself, banging his head and throwing body; less constipation; expressive speech development; relief from dystonia-related tightness and pain; and seizure control. (Note: Solly’s possible seizures are currently controlled with a pharmaceutical drug called Keppra. He has not had any clinical seizures since the NICU and while he has an abnormal EEG, he has never had a seizure caught on an EEG, even in the NICU.) Considering all of the areas in which we were seeking help, Dr. Goldstein was extremely optimistic that a combination of cannabinoids could be beneficial for him. She walked me through all of the cannabinoids and gave me anecdotal evidence about how combinations have been successful and not successful for some of her other patients. She suggested we first start where we’d already begun, with CBD, but in a much higher dose: a low dose of CBD (where we were) can actually cause hyperactivity and overstimulation, but a high dose of CBD can help calm and focus the body, act as an anti-convulsant and more. She cautioned that finding the right dose was a lengthy process, one of trial-and-error where we’d try a dose for 1 to 2 weeks and if we saw benefits without negative side effects (namely fatigue or irritability), we’d increase the dose for another 1 or 2 weeks. The goal with this trial-and-error process is to find the dose at which Solly receives the most benefits without any side effects.

We went home and started Solly on a dose of 13.2 mg of CBD twice a day, with instructions to touch base with Dr. Goldstein every 1 to 2 weeks with an update and to receive guidance. We started with Haleigh’s Hope since we had a nearly full bottle at home, but decided to switch to a full spectrum CBD by Lazarus NaturalsLazarus Naturals since it’s about half the cost but of the same quality. Once we got to a dose of 25 mg, we started noticing Solly becoming much more verbal, focusing on and interacting with TV shows. His expressive speech became more prominent as we increased his dose, really exploding as we did intensive therapy at NAPA Center around the time we doing a trial dose of 60 mg. In the end, we settled on a dose of 65 mg twice a day for his current weight, or 3.7 mg/lb/day CBD.

Here is just one example of Solly speaking, one of my favorite videos so far:

One thing Solly has always struggled with is sensory-seeking behaviors, which hampers some of our efforts in speech, occupational, and physical therapy – and I suspect it will make school difficult as well. Now that we’ve settled on our dose of CBD, we’re looking to target these sensory-seeking challenges with a new cannabinoid, starting first with THCA. Unlike CBD, THCA is not legally available in all states: in California, you have to purchase it directly from a dispensary. While we’d hoped to begin with Jayden’s Juice, a brand formulated specifically for children, we struggled to find it at any dispensary within an hour of our home, so we instead started with a different brand called CKSoul. We’re just a couple of weeks into dosing with THCA (to put that into perspective, it took three months to find the right dose of CBD), and while we’re not seeing any benefits with it yet, I’m cautiously optimistic that we’ll find a dose of THCA or a different cannabinoid, that will help calm Solly’s body and sensory-seeking urges.

It may take some time to figure it out, but even if we don’t find any benefit from any other cannabinoid, this journey has already been well worth it. Being able to communicate back and forth with Solly and understand his wants and needs by him verbally expressing them has been life-changing for us. I’m hopeful for additional benefits from cannabis and will write a follow-up post should we see further benefits. 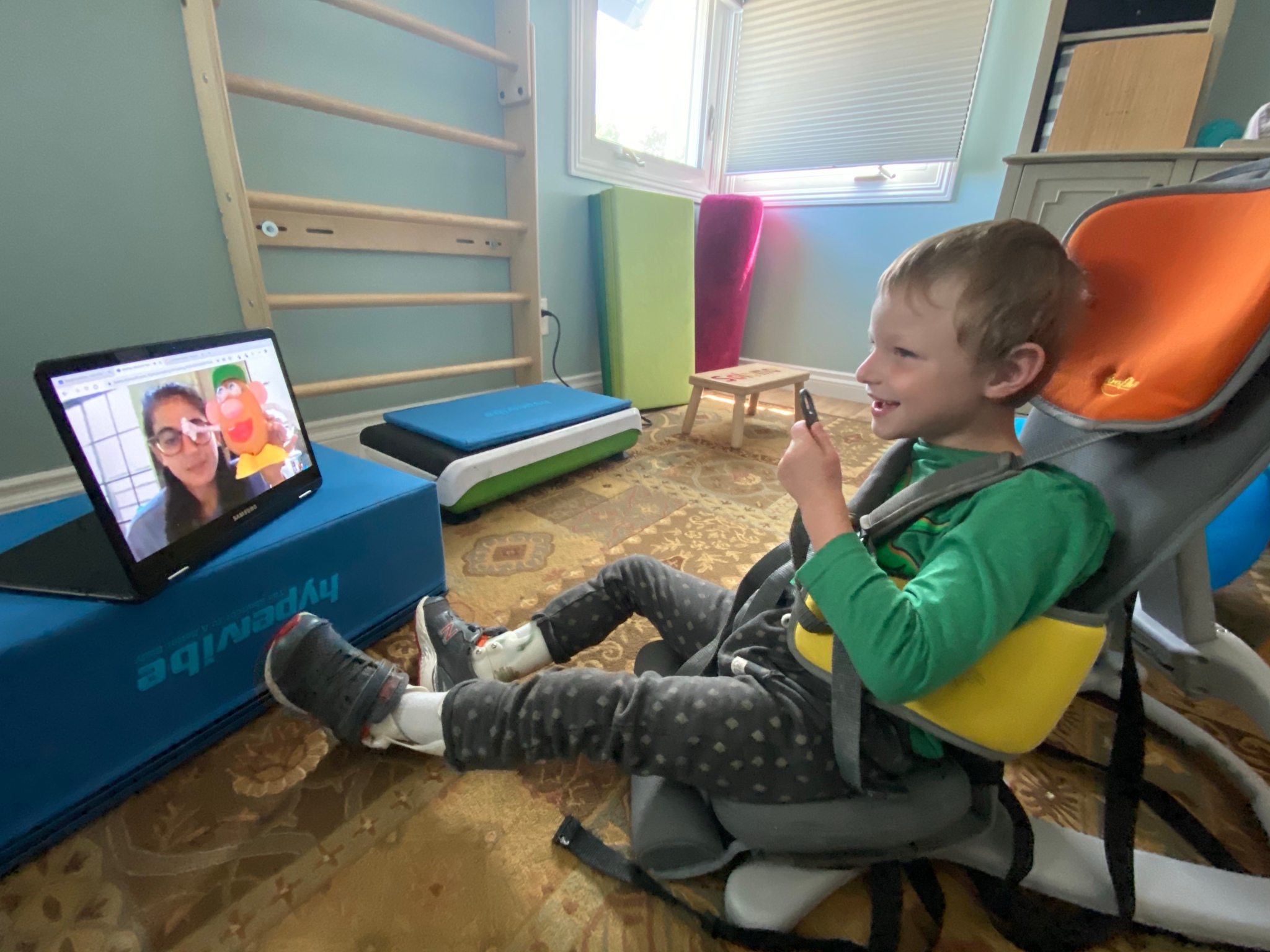 Solly working hard and interacting with his speech therapist during a recent teletherapy visit.

2 thoughts on “Getting Started with Medical Cannabis”