I’ve struggled with this post. I’ve debated on how much medical detail I should go into on a topic that I truly don’t know that much about. I also worried about sharing too much because, as I’ve learned by participating in support groups on Facebook, stem cell therapy is still very much in a research phase and, as such, it is a polarizing topic. However, because we did our own research and have had wonderful results with our first round of stem cell therapy, it’s important to share our experience. Here it is.

I never thought stem cell therapy would be an option for Sol. When I was pregnant with him, we didn’t make the necessary arrangements ahead of time to bank his cord blood. Honestly, we had a perfectly healthy pregnancy, so there didn’t seem to be a need for it.

After Solly was born and we started seeking out less traditional treatments, I kept hearing about stem cells, not entirely knowing how it worked. When I found that an ongoing clinical trial at Duke University was only for children with cerebral palsy using stem cells from their own cord blood (here are some of the results from that trial), I put the entire idea on the back burner. Around the time that I was pregnant with Bea, I heard whispers that Duke’s next stem cell study for cerebral palsy would be testing sibling cord blood, so we arranged to bank Bea’s cord blood so we would be prepared when this treatment was available to us.

Then, last Fall, I came across another family’s experience with stem cell therapy for their sweet daughter, who also has cerebral palsy. Her story can be found on Fifi + Mo, and it’s worth a read because it goes into a little more depth on the medical treatment than I will here.  They saw Dr. John Shieh, a doctor based in Pasadena, California, for stem cell therapy, who uses stem cells derived from donated newborn cord blood. (While stem cell therapy is not FDA-approved or regulated (yet) for cerebral palsy, the stem cells come from a third party lab and the stem cell collection and storage is regulated by the FDA.) I did some research and came across several other families of CP kiddos who had traveled to Dr. Shieh for stem cell therapy, and since I was in the midst of planning travel for our intensive therapy at NAPA Center at the time, I thought perhaps we could schedule an appointment to see Dr. Shieh while we were nearby in Los Angeles.

I submitted an inquiry to Dr. Shieh’s office via email and got a quick response, setting up a phone consultation for the following week. The consultation was with Dr. Shieh’s wife, who spent an hour learning about Sol’s medical history, filled me in on Dr. Shieh’s experience with stem cell therapy, and walked me through their procedure. We agreed that this was something that could be beneficial for Solly, and we decided to schedule our appointment for the beginning of Sol’s intensive therapy so the stem cells could enhance his session at NAPA Center.

At 8:30am on March 12th, a Monday morning, I packed up the car and Solly and I headed to his first day of intensives at NAPA Center. Three hours later, we were back in the car, on the highway, and heading to Pasadena. We got to Dr. Shieh’s office right at 1:00pm, after a quick lunch, and were escorted back to a treatment room. Coincidentally, another Mama who had contacted me just a couple of weeks earlier about our experience with HBOT was also at Dr. Shieh’s office for a stem cell therapy appointment for her son. Her sweet family’s appointment was wrapping up as we got there, so we got to say hi (IRL!) and hug each other. It’s always so nice to meet another stroke warrior’s Mama, especially in person! She told me how wonderfully her son had done with his treatment, so any nerves I had disappeared. 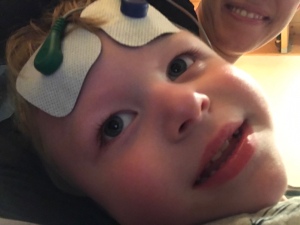 We met with Dr. Shieh almost immediately and based on Sol’s medical history, he set up a microcurrent program specifically tailored to Solly’s needs. The microcurrent is a technology that uses frequencies to stimulate healing and regeneration, and when used with stem cells, it essentially helps the stem cells know where to go. It’s a simple machine that looks fairly similar to an E-Stim machine and is connected to Solly through sensors placed on his forehead and at the back of his head. The microcurrent  ran for the first hour and a half while Solly and I kicked back and watched some cartoons. Towards the end of the first hour, Dr. Shieh came back in and gave Sol a sedative so it would be easier and more comfortable for them to administer the IV for the stem cells. The sedative was given via the nose and it took effect very quickly – within seconds, Solly’s eyes drooped a little bit and he began giggling hysterically. Dr. Shieh and his team were able to quickly insert the IV and we were ready to begin administration of the stem cells, which were done over the course of an hour. Roughly 80% of the stem cells were given via the IV, which went by very quickly. The remaining 20% were given in small amounts every 5 to 10 minutes up the nose so they could travel up the olfactory nerve directly to the brain. 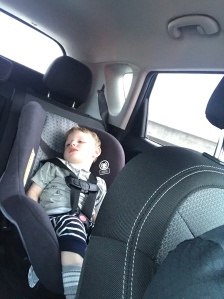 After the stem cell administration, they ran the microcurrents one last time, which lasted about 50 minutes. This is something we could have purchased to use at home for continued healing and regeneration, however we opted to not purchase a microcurrent machine because I knew we wouldn’t be able to work it into our schedule at home. Plus, it was a little pricey. The total time spent in the office was about 4 hours, which made for a long day. Solly was exhausted and fell asleep in the one hour car ride back to our rental home.

OK, I know the question that everyone wants the answer to is: have you seen any gains from the stem cells? The quick answer is – YES! We’ve seen many measurable gains since the day we got stem cells, some can be attributed in part to our time at NAPA Center, but there are also some that are solely the result of stem cells. Solly’s expressive speech has improved dramatically. He now will consistently answer “yes and no” questions, so we know exactly what he wants (hip hip hooray!). He’s also making new sounds, stringing different sounds together. We’re even fairly certain he said in the car the other day: “Mama! A puppy!”  His feeding has also positively changed – he’s taking sips from a straw, blowing on his food, and can manipulate different textures and flavors much better than before.

We attribute many of his gross motor gains to the combination of stem cells and intensive therapy. His gross motor skills, specifically reciprocal leg movement and walking, have only continued to improve since we got home.

When we were with Dr. Shieh, I asked him how long we can expect to see the stem cells working, and he said it’s likely we’ll continue to see gains up to six months. Based on what we’ve seen so far, this journey was well worth it and we’re hoping to travel back to Pasadena for another round of stem cells later this year. 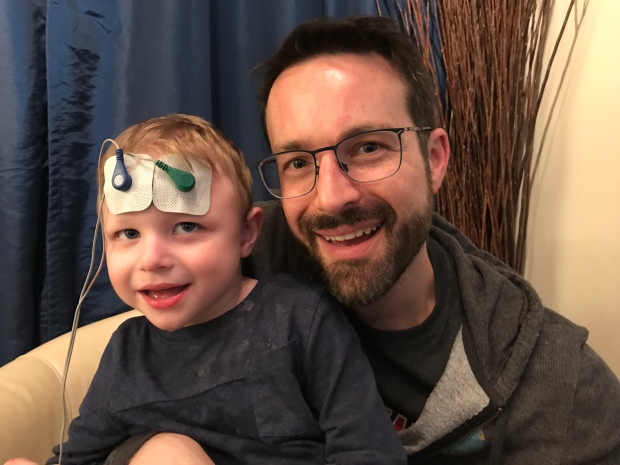