May 6 – 12, 2018 was National Nurses Week. As I read through posts on Facebook and articles online, I recalled our time in the NICU where the nurses played such a major part in Solly’s recovery. There was one NICU nurse in particular who I credit with getting Solly home quickly and setting him up for success – namely, teaching us how to fight for him. This is our story with Judy.

“He’s going to be there for weeks or even months, not days,” Mike told me as I shook my head in disbelief, tears streaming down my face. It was two days after Solly was born via emergency c-section and he’d been admitted to the NICU due to seizures. We’d just received the result from his MRI: massive, multiple bi-lateral strokes that occurred some time around birth. The prognosis from the fellow on duty that evening was horrible. She didn’t sugarcoat it at all: our son would never walk or talk, he’d likely be unable to hear or see, and he’d probably never live an independent life.

END_OF_DOCUMENT_TOKEN_TO_BE_REPLACED

We are home, we are home! Sol passed his car seat challenge and trending test last night, so doctors agreed that he could come home – without wires or monitors. Mike, Sol’s Aunt Jenny (my sis), and I went to the NICU today at 1:30pm and we were on the road with Sol by 3:30pm. It was a bittersweet day – a bit sad to say goodbye to all the wonderful people who helped care for Sol over the past month, but we are SO happy that Sol is healthy and able to be home.

To everyone who have sent words of encouragement, thoughts, and prayers over the past month, THANK YOU so much. Mike and I were able to remain strong for Sol because of your support, and we know that God is listening to prayers and continuing to watch over our little man. Our journey with Sol is just beginning: though it likely won’t happen everyday, I will continue to update the blog with his progress, recovery, and milestones. 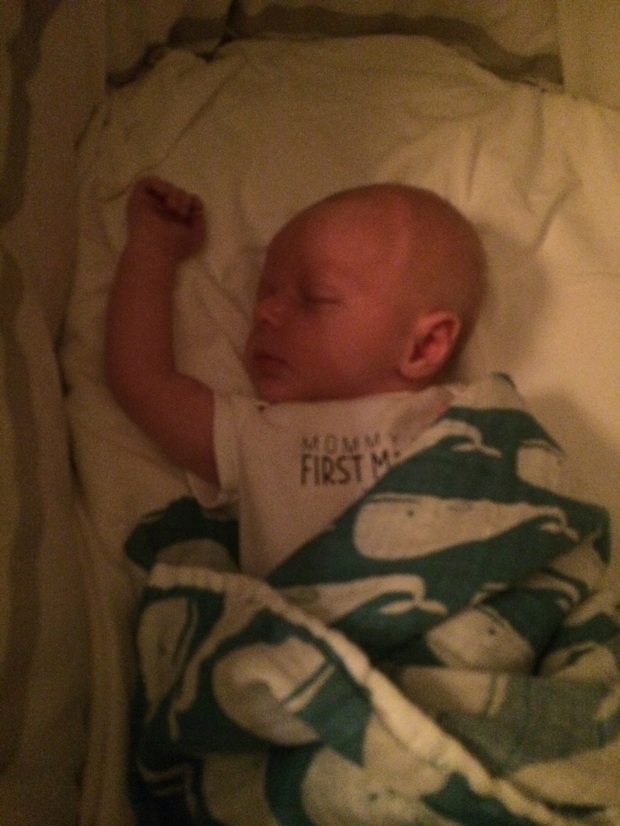 For the first time in a really long time, Mike and I got to see Sol’s face with no tubes or wires. It was so nice! We took the opportunity to snap an official “1 month” photo of him, since Sunday was his official 1 month birthday.

We got to the NICU to find him hooked up to a portable monitor, a 24 hour test to see if he has apnea and needs to come home with one. We should find out the results on Tuesday and have a better sense of when he can come home.

Snoozin’ in between bottles: 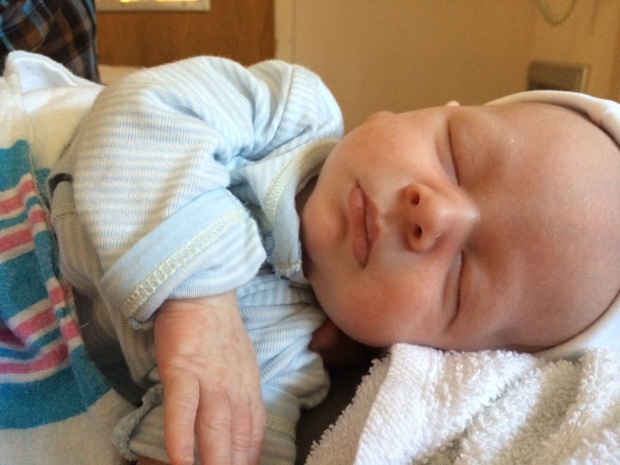 Look at how big I am:

Ever watch a Discovery documentary during Shark Week where a shark jumps out of the water to chomp down on its prey? Today, Sol was that shark and the bottle was his prey. He attacked it, viciously. This little man is hungry, and now that feedings are done on his schedule, he wants to EAT. A lot.

Mike and I got to the NICU at 8:15am this morning, expecting to do Sol’s 9am feeding. His nurse informed us that he’d woken up before 8am, demanding a bottle, so she fed him 65ml. (His usual is 60ml.) Just under 3 hours later, he woke up and was hungry for more. Mike fed him 75ml. (Sol literally attacked the last 10ml of that bottle, reminding us of the shark from Jaws. It gave us a good laugh!)

From what Sol’s nurse told us over the phone just a minute ago, the rest of the afternoon continued in the same pattern.

The best news of all: the doctors rounded this afternoon and heard that Sol was taking all of his feeds via bottle, so they said that his nasal feeding tube could be removed! As such, this should be the last post where Sol’s face is hidden behind any tubes.

Next up: a 48 hour “trend” monitor to see if Sol needs to come home with a heart rate and oxygen monitor. He’ll then do a “car seat challenge” to make sure oxygen levels are ok when in the car seat. And then, as long as we don’t have any steps backwards, he’ll finally head home.

Today was one of those two steps forward, one step back kind of days. Here’s the bottom line: Sol is no longer coming home on Monday. The really sucky thing is that it isn’t his fault at all. In fact, he is still kicking ass and smashing all expectations.

Sol has to be eating 100% of his meals by mouth before he comes home. But, here’s the thing: he gets fed every 3 hours, on the hour. If he stayed awake too long during one feeding, and can’t wake up for the next one, they give it to him via his nasal feeding tube. This goes against his record of bottle feedings. See the issue?

Over the last 3 days, he’s had 70 – 80% of feeds by mouth. Pretty darn good, considering a week ago he hadn’t had a full bottle. When feeding him, it’s clear that he could handle the volume of 480ml in a 24 hour period. In fact, after his noon bottle today, he was still hungry and sat for two hours rooting at anything resembling a bottle. At 2pm (an hour before his feeding time), we told the nurse what was going on and she gave us a 20ml bottle to see if our hunch was correct. We were spot on: he gobbled it down and still ate a full bottle at 3pm.

Seeing this, after the doctor mentioned that he was falling short of 100% of feedings by mouth, his nurse stuck up for Sol and convinced the doctor to give him a daily minimum and allow him to eat when he’s hungry. (Another huge win for the NICU nurses. Seriously, they are awesome.)

So, we’re going to try this for the next day or so and see if it helps him get to 100%. Once he gets there, they’ll need 48 hours to finish up his remaining tests and then he can come home.

At this point, we’re looking at a Wednesday discharge as the best case scenario. (This whole NICU thing is starting to feel like a nightmare that won’t end.)

On a more positive note, Sol rocked his bottles and tummy time today! Here’s some cuteness:

Sol refusing to burp, but being awfully cute:

Checking out his mobile:

Working on the neck muscles: 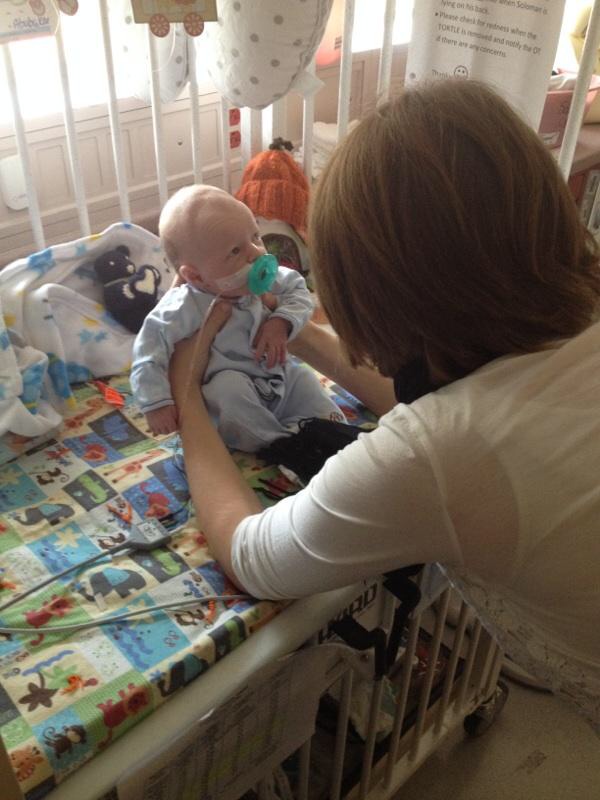 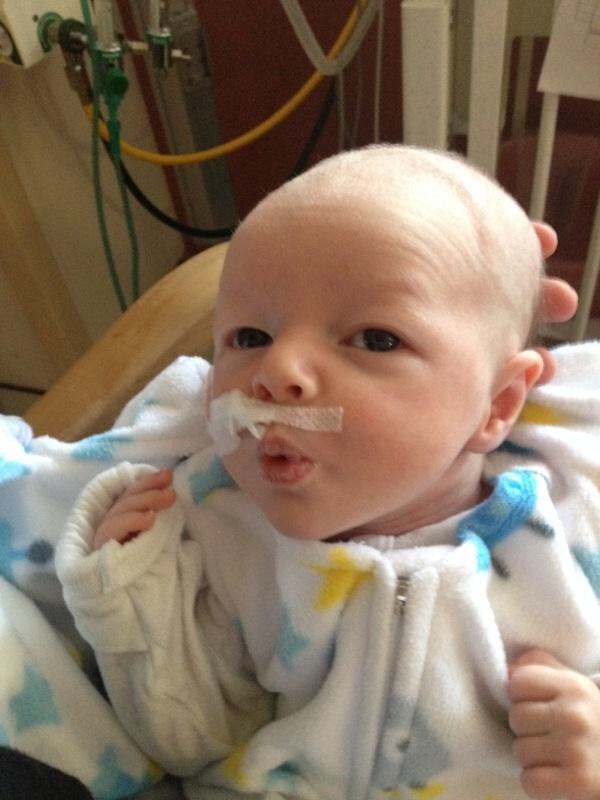