Ever watch a Discovery documentary during Shark Week where a shark jumps out of the water to chomp down on its prey? Today, Sol was that shark and the bottle was his prey. He attacked it, viciously. This little man is hungry, and now that feedings are done on his schedule, he wants to EAT. A lot.

Mike and I got to the NICU at 8:15am this morning, expecting to do Sol’s 9am feeding. His nurse informed us that he’d woken up before 8am, demanding a bottle, so she fed him 65ml. (His usual is 60ml.) Just under 3 hours later, he woke up and was hungry for more. Mike fed him 75ml. (Sol literally attacked the last 10ml of that bottle, reminding us of the shark from Jaws. It gave us a good laugh!)

From what Sol’s nurse told us over the phone just a minute ago, the rest of the afternoon continued in the same pattern.

The best news of all: the doctors rounded this afternoon and heard that Sol was taking all of his feeds via bottle, so they said that his nasal feeding tube could be removed! As such, this should be the last post where Sol’s face is hidden behind any tubes.

Next up: a 48 hour “trend” monitor to see if Sol needs to come home with a heart rate and oxygen monitor. He’ll then do a “car seat challenge” to make sure oxygen levels are ok when in the car seat. And then, as long as we don’t have any steps backwards, he’ll finally head home. 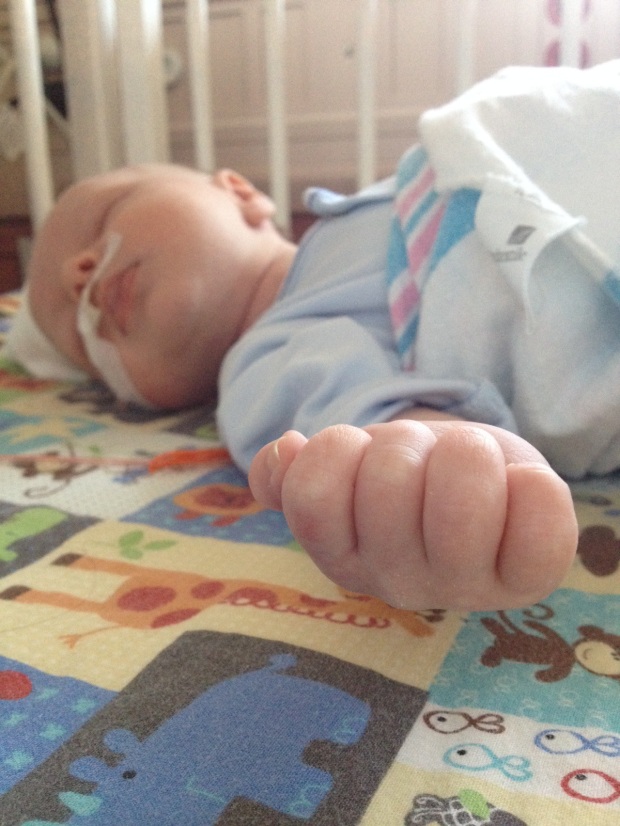