Nothing could really prepare us for Solly’s Selective Dorsal Rhizotomy. That’s not to say that I totally unprepared: I’d read countless personal stories about the surgery, devoured anything the doctor’s office sent to us, and asked plenty of questions of fellow Mama’s whose babies had already had the surgery. Those Mamas were even kind enough to give me tips and tricks for the hardest part of the surgery: the recovery. I’ve said it before: the Special Needs community is awesome.

All that said and done, next to our time in the NICU, this surgery was the hardest thing we’ve been through to date with Solly. There were a lot of unhappy moments, quite a few tears, and many sleepless nights. Solly is one of the happiest kids I’ve ever met, so when I see him crying or in pain, I will do anything to stop it.

It was an exhausting few days.

There’s a lot to cover. Here’s what went down before and during surgery:

Solly and I woke up before the sun and were on the road by 6am to make it to St. Louis by 11am, in time for his first of three appointments of the day. Our first appointment was with the anesthesia team. This appointment is not one that’s typical for SDR patients, however because Solly has multiple blood clotting disorders that affect which anesthetics he can have, the St. Louis input team proactively suggested we meet ahead of time to talk things through.

Our second appointment was a 90 minute evaluation with the physical therapy department. They ran Solly through a Gross Motor Function Classification System (GMFCS) test to get a baseline on his abilities before the surgery. Solly has had this test many, many times. I hate it: it essentially predicts what he’ll be able to do as an adult based on his current abilities and, at present time, says he’s a GMFCS Level 4, meaning he’ll be wheelchair bound and need assistance for his entire life. We’re hopeful that SDR and all the therapy we’re doing now will help change that outcome. As I’ve said before, if that’s not the case, I’m ok because I love Solly exactly the way that he is and we will figure things out no matter what he can or can’t physically do. I hate that practitioners run this test on children so young because with many therapy centers, it narrows their approach to treating a child. I like to approach Solly’s therapy with the attitude of “the sky is the limit”, so often veer away from any practitioner that uses this test to guide their treatment. (If you’re interested in reading more on the GMFCS test, the late Dr. Karen Pape wrote a fantastic series of posts on the subject.)

Our final appointment of the day was with Dr. Park’s Physician Assistant. We went over what to expect during the day of surgery, including eating and drinking instructions for the morning of, and then what to expect as Solly recovers in the hospital as well as some instructions for recovery at home. At this point, we learned that Solly was going to be Dr. Park’s third (!!!) SDR surgery of the day, with a surgery time of 12:45pm. Solly had to stop eating by 5:00am, he could drink clear liquids up until 9:00am, and we needed to be at the hospital by 11:15am. I’d been hoping we would have the first surgery of the day so we could just wake up and go straight there, but that just wasn’t the case: we’d have to find a way to occupy our and Solly’s minds the next morning.

After our third appointment, Solly and I met up with Mike who had just flown in from  a work conference and then we took a leisurely walk to Panera to treat Solly to some mac and cheese and cookies. Solly’s Nana and Papa, my parents, drove up in the afternoon with Bea. After we reunited with them, we had a fun dinner out at Sauce on the Side (highly recommend this restaurant if you’re traveling to St. Louis!) and then we headed back to the hotel so Solly could get a swim in with Papa.

I woke up with butterflies in my tummy. I’d been dreading this day for the past two months: I knew not allowing Solly to eat in the morning would be difficult, waiting at the hospital before the surgery would cause me anxiety, and waiting during the surgery would be unbearable. Not to mention the pain and discomfort he would feel in the days immediately following the surgery.

To keep our minds off of the events to come, we loaded the kids in the car and headed to the St. Louis Zoo, where we spent 90 minutes pursuing the exhibits, including watching the Grizzly bears jump up and down while playing a pond. It was such a nice distraction and a much easier way to get to 11am than just sitting around the hotel. When the time came, Mike and I drove Solly to the hospital and went up to the 6th floor to start the admission process. I was starting to get teary-eyed while waiting, but fortunately, a support staff member came over, sat and chatted with us – about what, I don’t remember, but it was a nice diversion until a nurse met us in the waiting room. She got Solly a pair of pajamas to change into and got him into a bed.

Just a few minutes after we settled into our room, a familiar face popped through the door. A family friend made a surprise visit, bringing with him a photo of Solly signed by well wishers for Solly’s surgery. At a moment when we were really starting to feel nervous, it was so nice to feel an abundance of love and the nice distraction of having a friend to chat with. 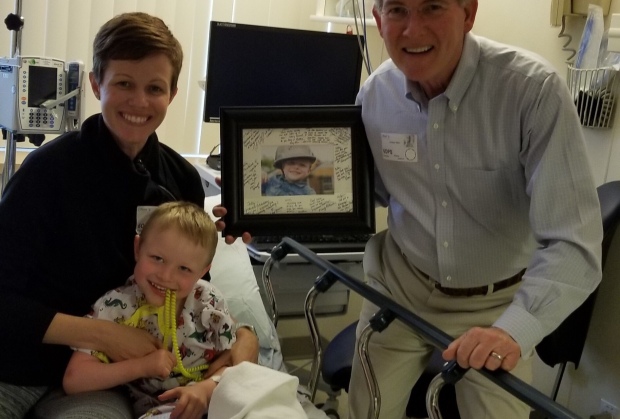 A surprise visit from a family friend, with a present for Solly

Over the next several hours, we met with more family support staff members, the surgical team, the anesthesia team, nurses, and more. We felt completely inundated with information – which was great, but we kept watching the clock tick by, hitting 12:45pm, then 1:15pm, then 1:45pm. I started to get impatient, worrying that Solly would get dehydrated since he hadn’t had liquids in several hours (not to mention, he hadn’t eaten anything since dinner the day before). I started nagging the nurse to check on the status of the surgery before ours. Finally, at 2:15pm, someone from the anesthesia team came by to give Solly a sedative: this would keep him calm while they wheeled him away and put his mask on to give him anesthesia. At 2:20pm, they took him back to the operating room.

We’d been told to expect the actual surgery to last anywhere between 2 1/2 to 3 hours, but the surgical team also needed time before the surgery to administer IVs and position him on his tummy for the surgery and time afterwards to place an epidural for pain management, so the total time would be closer to 4 hours. In short, lots of time to try and keep our mind off of the surgery! Fortunately, a nurse in the operating room would call my cell phone every hour with an update, so we were never kept in the dark. (Funny story: the first call I got from her was right after they began the surgery. She told me how cute Solly was and how he flirted with all the nurses wheeling him back to the operating room. Yep, sounds like Solly!)

Going into the surgery, I was worried about how I would fill those hours, but after they wheeled him back, I felt very at peace, knowing that Solly was with the best surgeon possible. Mike and I went down to the cafeteria for lunch, and afterwards Mike headed back to the hotel to spend some time with Bea while my parents came to the hospital to keep me company. After a third phone call from the nurse, I learned that the surgery went well and that Dr. Park would soon come out and talk to me. Around 6:00pm, he came out and let me know that the surgery went perfectly and that Solly would initially be very weak, but he could get strong with lots of hard work. He said Solly would be moved to recovery and that someone would be out to get me soon.

Waking up after surgery

Finally, at 7:00pm, a nurse came out to let me know Solly was waking up and that I could be with him. It was so hard to see him in such a dazed state. Mike came up right after I got to Solly’s side, and we gently woke up him at the nurse’s request to see how he was feeling. He almost immediately started crying. For those who know Solly know how sweet and happy he is, so any time he cries, my heart breaks. I crawled into bed with him and held him as tightly as I could. He was getting pain medication directly through an epidural and an IV, but we also requested a dose of Valium to help keep him calm. After about 30 minutes, the nurses wheeled us up to Solly’s in-patient room. Once set up there, I ran downstairs to the cafeteria to grab some food to keep in the room with me overnight while Mike sat with Solly. Mike helped me get my bed set up and he returned to the hotel room to be with Bea.

The first night was the worst. Thanks to the initial dose of Valium, Solly quickly fell asleep, but he woke up each time the nurse came to check on him or take his vitals. At 2:00am, he refused to go back to sleep. At 3:00am, he threw up – a common reaction to anesthesia. Even though he continued to get pain medications, he whimpered throughout much of the early morning hours. At 6:00am, I rang the nurse to ask for something else – a sedative, a relaxant, anything to calm him – and she told me with a seemingly short tone that they do not give any sedatives. I begged her, telling her he’d not slept since 2:00am, but she couldn’t offer me anything. (Lies, people, LIES!) I called Mike in tears. He left Bea with my parents and quickly came back to the hospital. Fortunately, at 7:00am, the nurses changed shifts, and our daytime nurse came in to introduce herself. I told her about our overnight dilemma and she immediately got Solly a dose of Valium – it was on his charts that he could have a dose of Valium as needed, so we now knew to just request it when Solly needed to relax or when he was experiencing muscle spasms. He immediately relaxed and began to snooze.

I learned so much that first night, but had no idea how exhausting and challenging the next couple of days would be. Stay tuned for the next post on our 5 day stay in the hospital.