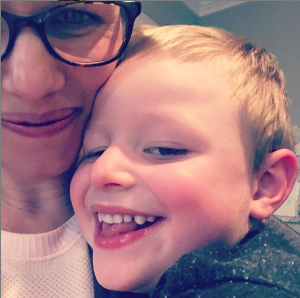 In two weeks from today, Solly and I will be in St. Louis to consult with world-renowned neurosurgeon Dr. T. S. Park to determine if Solly is a candidate for a procedure called Selective Dorsal Rhizotomy (SDR). This is a potentially life-changing surgery and while it is one that I’m not confident that Solly is a candidate for, there’s a part of me deep down inside that has all fingers and toes crossed that we’ll get a “yes” from Dr. Park and will be able to schedule surgery for the first half of this year.

If you’re interested in a medical explanation of SDR, I highly suggest heading over to the St. Louis Children’s Hospital’s SDR page. If you want the Camie explanation, read on. In short, it’s an invasive surgery where a surgeon cuts through the spinal nerves located in the lower back that cause spasticity. Spasticity, or muscle tightness, is a common side effect of cerebral palsy and it’s one of the main reasons that Solly struggles with things like four-point crawling, ground transitions, and walking. SDR would almost permanently eliminate spasticity. (If you’ve been following our journey for awhile, you might remember that we had a much less invasive procedure called SPML done back in 2017. The results would be similar, but permanent – the spasticity would not return.)

There are many neurosurgeons across the United States who perform SDR. Historically SDR has only been performed on children who have spastic diplegic cerebral palsy, meaning it only affects their legs and was likely caused by a premature birth. This is because the original SDR surgery is a multi-level surgery: more of the back is affected by the surgery, so children with low tone in their core (like Solly) would automatically be disqualified from the surgery. Dr. Park has since developed a less invasive, single-level SDR surgery where less of the spine is affected, so he can operate on children with diplegic, triplegic, and quadraplegic cerebral palsy. To date, he has operated on over 4,000 children.

OK, so I don’t actually know what Solly’s chances are for being approved for SDR. I do know for sure that he has one big thing going against him: one of his three strokes, the left MCA ischemic stroke, destroyed much of his left basal ganglia. This means that in addition to the spasticity, he should have a great deal of dystonia. Dystonia has been a difficult concept for me to grasp because in most cases, Solly doesn’t present with dystonia. If you’ve met someone with Parkinson’s Disease, you’ve seen dystonia: it’s a neurological movement disorder that results in twisting, repetitive movements. The fear with doing SDR on someone with mixed spasticity and dystonia is that by removing the spasticity, the dystonia comes on full force. Dystonia is much, much harder to treat and control than spasticity, so this is not a good thing. (One treatment that could provide relief from dystonia is medical cannabis, something that we can’t get here in Tennessee.) Most of the therapists who have worked with Solly struggle to truly identify his dystonia, and this makes it really hard for me to gauge what decision Dr. Park will give us.

Our Process for Applying for SDR

I’ve known about SDR for quite awhile now, but for reasons I explained above and because Solly’s cerebral palsy is more severe and complex than many children who have the surgery, I did not seriously consider it until last Spring. Plus, I’ve got to be honest, putting Solly through a huge, major surgery like this with all the risks that go along with surgery scares the shit out of me.

While we were in Los Angeles for our first intensive at NAPA Center, I met a Mom whose then 2 year-old daughter had SDR with Dr. Park just months earlier. Like Solly, her daughter was born full-term and had triplegic cerebral palsy. While Solly was working on taking his first steps in a gait trainer, this woman’s daughter was learning to walk with a walker and had gained use of her affected hand after the surgery. Her Mom said she also had huge gains in speech after the surgery as well. After chatting with this Mom and having her watch Solly work with his therapists, she convinced me to contact Dr. Park, thinking there could be a chance that he could be accepted for surgery.

And you know me: if we can do something to help Solly become more independent, we do it. It’s as simple as that. Never let your fear decide your fate.

Dr. Park offers two types of consultations: video or in-person. Because I was fairly certain we’d get an immediate “no”, I decided to forego the travel associated with the in-person consultation and go the video route. After filling out an online screening form, I received an email with instructions to sign a number of forms, send in Solly’s recent hip and spine X-rays and his MRI from when he was one month old, and put together a video of Solly doing specific movements, which you can see here:

Just a few weeks later, I got a call from Dr. Park’s office. His PT said that while they were concerned that Solly’s MRI showed the potential for dystonia, they wanted to do an in-person consultation to give us their final answer. We needed to have an updated MRI done so we could see what his brain looks like now – to see if it was still showing that massive amount of damage to the basal ganglia (it is) – and once they received that, they would schedule us for an in-person consultation. (Dr. Park is a busy guy: his in-person consultations schedule about 4 to 5 months out. Talk about a cliffhanger, right?)

So, that’s how we got to where we are now. We’re two weeks out from the big 3 hour consultation to determine whether or not Solly will be a candidate for SDR. I’m a realist: I’m going into the appointment with the assumption that our answer will be a “no”. I’m not going to lie, I’m really hoping that I’m wrong, but I do recognize that his brain damage could mean that SDR is just not in the cards for him. If Dr. Park does say “no”, I’ve got some other ideas on how to help relieve Solly of his muscle tightness – another round of SPML, alcohol blocks, and the eventual introduction of medical cannabis – so all is not lost. But, if he says “yes”, things could really change for Solly. At the very least, he could live a much more comfortable life, free from the pain and discomfort of spasticity. Or, better yet, he could even learn to move more independently, walk in a walker, with crutches, or even interdependently. Only time will tell.

If we do get a “yes” from Dr. Park, I’ll write an update and give more details on the surgery and what recovery will look like. But, for now, here are a couple of stories of how SDR has changed lives:

One thought on “Solly and SDR”