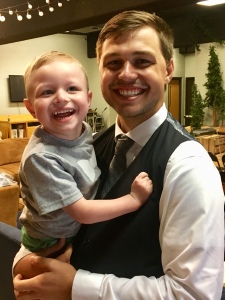 My heart soared when Reid and Katie asked Solly to be their ring bearer late last year, especially when I overheard Katie tell him: “Now, Solly, we don’t care how you get down the aisle. You can walk, you can ride in a wagon, you can be carried, we don’t care. We just want you to be a part of our day.” (How lucky are we that Katie is now a part of our family?!) And the inclusion didn’t stop there: every time anyone in their wedding party saw Solly at any of the wedding events and over the wedding weekend, it was “oh, hey Solly, how’s it going?” even though every single person who said hi to him knew it was very likely that Solly would just respond with a “hi” and a wave. This approach to including Solly is how I wish the world would include anyone with a physical or intellectual disability.

Now, if you’ve been following the blog in recent months, you know that Solly has been walking in his gait trainer for pretty big chunks of time, so in the weeks leading up to the wedding, I was confident that walking down the aisle could actually happen. Solly gets a little overwhelmed with new environments, so about 10 days before the wedding, Solly and I met my sister at the church so Solly could practice walking for the wedding day. I was excited for him to strut his stuff. We wheeled the gait trainer to the top of the aisle, got Solly all strapped in, and … nothing. Solly sank back into the sling seat of his gait trainer, stuck out his bottom lip, and shook his head. No. We tried all forms of motivation – cheetos, the iPhone, song and dance – nothing worked. Solly was not going to walk down that aisle. We chalked it up to Solly acting like a typical 3 year old and decided we’d try again at the rehearsal.

On the day before the wedding, I drove Solly to the church. He was all decked out in white linen shorts, a blue and white button up shirt, and navy suspenders. The gait trainer was in the trunk of the car. As we drove over, I told Solly what was going on, that there would be quite a few people at the church and it might be noisy, but I had his noise cancelling headphones in case it got too loud for him. After I pulled into the parking lot, I turned around and asked Solly, four times, “Do you want to walk down the aisle?” And four times, Solly shook his head. No. “Do you want to ride in the wagon?” No. “Do you want Eli to carry you down the aisle?” A smile and a head shake. Yes.

I relayed Solly’s wishes to everyone inside the church and we all giggled at how Solly really is a typical 3 year old. And a day later, Reid married Katie. It was a beautiful wedding, complete with Solly saying “hi” and waving as his cousin Eli carried him down the aisle. 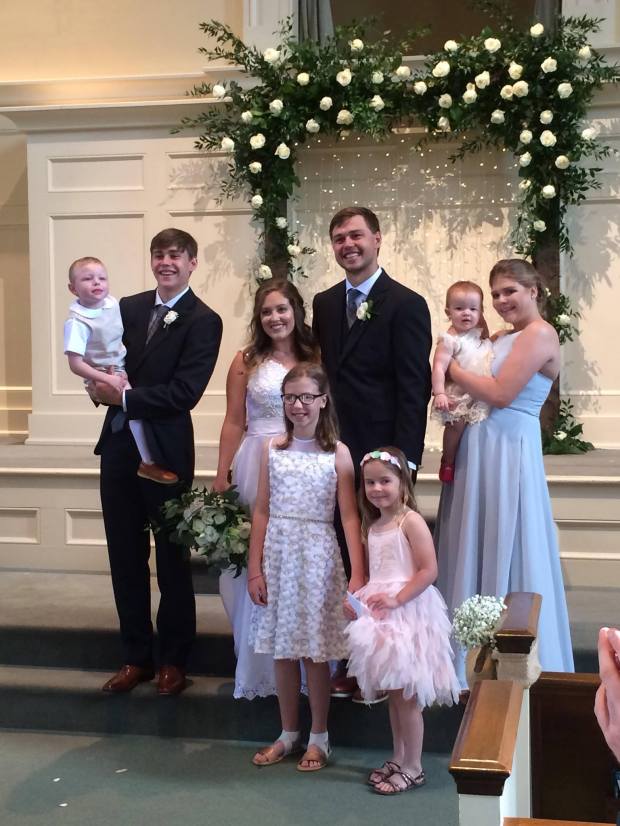 Reflecting on this past weekend, there are so many gains I recognized even though Solly didn’t walk down the aisle on his own:

It really is incredible when we have days like this when we are able to reflect and recognize how far Solly has come from the early days when all we had was hope and a grim prognosis. 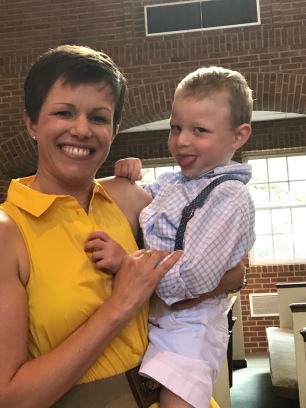 One thought on “Head of Ring Security”