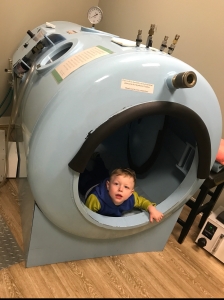 Solly in his submarine

This morning, Solly and I finished our 5th of 40 dives in our second round of hyperbaric oxygen therapy (HBOT).

As I’ve told folks about this therapy over the past few days, the biggest question I’ve gotten is: how the heck do you pass the time in that chamber? During our first round of treatment, the answer to this question was easy: we were in a sleek, all-glass chamber with a TV on the outside, so we’d watch an hour of Sesame Street or Fixer Upper and our time in the chamber would pass by rather quickly. However, the local facility where we’re doing our second round of HBOT has a very different chamber called the Fortius 420, which looks a bit like a submarine – it’s fairly dark, has three small windows, and no TV (eek!). This difference is, in part, what led to my anxiety before we began our second round of treatment. I kept worrying, “How was I going to entertain a 3-year-old in an enclosed space for over an hour every day….. and stay sane?”

In sum, we spend 75 minutes in the chamber. We “descend” to a pressure of 1.5 atmospheres for about 7 minutes, we are at that depth for 60 minutes, and then we “ascend” for about 7 minutes. We’re allowed to bring a bottle for Solly to drink, a few books, and some approved toys.

For the time descending and ascending, Solly has his bottle to help his body adjust to the new pressure. I use the remaining time to work on some of our therapy routines that I would otherwise do at home. The one huge benefit to the Fortius 420 chamber is that it’s over 3 feet in height and 7 feet long, so we’ve some room to sit up and move around, allowing our time inside to be rather productive. I break the 60 minutes into 15 minute chunks of time. During each chunk of time, Solly and I read a book (we’ve really gotten into the Llama Llama books lately) and I talk to him about what we see on each of the pages. While we read, I usually have him sitting, side-sitting, or in quadruped so we’re simultaneously working on his core and arm strength. We’ll then work through arm and leg stretches while singing silly songs. If we have any time left in our chunk of time, we’ll play with his toys. So far, I’ve brought some toys that work on some of his occupational therapy skills, like the Oball Shape Sorter and the Surprise! What’s Inside toy box.

Before I know it, our time in the chamber is up and we head home to see Bea or on to Solly’s next appointment.

Happy Fri-Yay!
Making weight-bearing on the right side extra fun yesterday in CME.
How Solly recovers after a day of intensive therapy: a stop at the local ice cream store for one scoop of ice cream and then endless snuggles with Mr. Bentley. 🐶 🍦
NAPA Intensive Day 5: We’re still struggling to keep Solly’s focus and attention and satisfy all of his sensory needs, but he’s working very hard and having some really awesome moments. This one was my favorite from Friday - a strong squat-to-stand. 💪🏻
There’s no better way to start the weekend than spending Friday morning at the beach with Nana & Papa! 🌊 ☀️
NAPA Day 4: Because Solly has been doing therapy at home for several months, we’ve been having to work extra hard to keep him focused and using tons of sensory input this week. (Being back in the clinic and getting to say hi to everyone is just so much fun! It’s definitely hard to concentrate when there’s socializing to be done.) But, even with all of his excitement, Solly has made some great progress keeping his upper body strong and centered while sitting, crawling, and taking steps, and he’s making strides towards tackling that tricky “t” sound. 💪🏻💪🏻
Hey Solly, is intensive therapy fun? Why, yes. Yes it is.
Day 1 of our 7th @napacenter intensive: complete! After spending the last 2 months at home, doing telehealth while LA fought through the latest COVID surge, it felt so great to be back with and see our favorite therapists at NAPA. We’re looking forward to working hard over the next three weeks. 💪🏻
It’s official: Bea had her first riding lesson today! 🦄 We’re so thankful for @ecomahony @niki_macleod and Lizzie the magical unicorn for their endless patience and for giving Bea such a positive experience, even after some initial tears because she wanted to ride the biggest horse on the farm instead of a pony.😂 She’s already talking about the next time she gets to ride.
There’s no such thing as a case of the Monday’s when you live near the beach. 🌊 #getoutside #beachlife
Loading Comments...
Comment
×
%d bloggers like this: