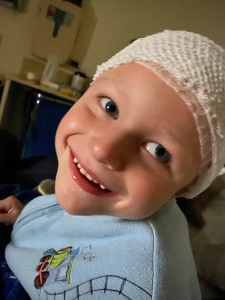 This is the face of a 5 year-old stinker who, the moment his Mama finally fell asleep around 4am during his 24-hour EEG, expertly removed his gauze cap and several of his EEG leads and proceeded to whoop and holler as he twirled it above his head, lasso-style. I wasn’t sure if I should laugh at his crazy antics or cry over the fact that this likely split-second movement could result in a second night at the hospital. I chose the former, threw on my mask, and ran out into the hallway to see if the on-duty nurses could help me re-wrap his head to preserve whichever leads were still remaining. We laughed as they tried to recreate the wrap while Solly batted his eyes at me and said, “Hiiii Mama.”

Let me back up a second.

EEG is a medical acronym that stands for electroencephalogram, referring to several metal sensors placed on the scalp that monitor brain activity and look for seizure activity. If you remember some of my posts from when we were in the NICU, Solly was often pictured with gauze wrapped around his head, covering these sensors while the NICU ran what seemed like a constant EEG on him. Since our discharge from the NICU, Solly had quick one hour EEGs, all done at Vanderbilt, at 12 months, 18 months, and 2.5 years. His EEGs, including those done in the NICU, all confirmed the same thing: he was experiencing no seizure activity, but had abnormal brain activity consistent with his MRI and some spiking that could lead to seizures. As a result, his neurology team has kept him on a low dose of the anti-convulsant Keppra, solely as a precaution to prevent breakthrough seizures.

Over the past couple of years, I’ve had conflicting thoughts over keeping Solly on Keppra. On one hand, we’ve never seen him have a seizure. I worried that Keppra was suppressing brain activity to the point of holding him back developmentally or could be contributing to some of his sensory-seeking habits and I wondered, since he hadn’t had any breakthrough seizures, if we could wean him off of the drug. On the other hand, some times when I checked on Solly during the night (something I do at least once in person and several times through a video monitor), I saw him jerk and worried that this jerking movement could indicate seizures. I never brought the latter up with his neurologist in Nashville: any time I ever questioned him possibly having seizures, her first response was to automatically increase his seizure dose without double-checking with an EEG and, again, I worried that could be contributing to his global delays. As I continued to observe these nighttime jerking movements, I considered Solly’s little sister who moves constantly in her sleep and thought that it could possibly just be Solly moving in his sleep, in his own dystonic way. So I just let it be.

Once we moved to Los Angeles, instead of seeking out a neurologist well-versed in pediatric stroke, as we did when moving to Nashville, I sought out a well-known epilepsy-focused neurologist at UCLA. This year, we’ve had two appointments with him, the first to introduce ourselves and give some medical background and the second to give an update and talk goals and concerns. In both meetings, I expressed my concern about whether Solly actually needed Keppra at all, if it could be causing some of the sensory issues that we constantly struggle with or if it could be suppressing some natural development, and if those movements at nights could be seizure-related activity. Given Solly’s medical history, the doctor was surprised that he had not had a 24-hour EEG to help guide medical decisions, particularly since it’s common for seizure activity to occur when falling asleep or waking up. We collectively decided that doing a 24-hour EEG to establish a baseline would be the next best step.

Aside from getting upset over a COVID test two days prior to the EEG and during the actual EEG lead placement (both typical 5 year-old responses that I celebrated), and the mischievous early morning removal of his EEG cap that I mentioned above, the actual overnight EEG went fairly smoothly. We passed the time by watching videos, reading books, Facetiming with family, and eating lots of snacks. Solly went to sleep fairly quickly and I saw those concerning night-time movements, which were captured on a video that accompanied the EEG. The next morning, before we were discharged from the hospital, we had a video call with our neurologist to go over findings (thankfully, he got enough data from the 15 hours that Solly kept on all of the EEG leads – no extra hospital time needed!). The EEG showed the exact same thing as our short one hour EEG: no seizure activity, but some abnormal spiking in all areas consistent with his rather remarkable MRI. Those nighttime twitches are Solly’s body simply trying to do typical nighttime movements. The neurologist’s verdict: we keep him on the same level of Keppra. His reasoning is that roughly half of pediatric stroke survivors go on to develop epilepsy and a small portion of those who experience epilepsy are unable to find seizure control. Because Solly’s MRI is so significant (he had over 50% brain damage) and because of his consistently abnormal EEG, the doctor felt that Keppra is probably doing a good job of keeping any possible seizures under control.

For those of you who’ve been following our little blog for awhile, you know I tend to seek out multiple opinions before deciding to move in a particular direction and when those opinions don’t match up, I make a decision based on what my gut tells me. Going into this EEG, I’d been hoping to get the answer that we could try weaning Solly off of Keppra. I’m not a huge fan of keeping him on a medication that his body has become dependent on. I’d prefer to just have him on natural medications and supplements. However, I don’t want to mess with seizures. Prolonged seizures can cause oxygen deprivation and further brain damage, and to me, those risks aren’t worth it especially when we’ve had three doctors (our neuro in Nashville; Dr. Park in St. Louis, who did Solly’s SDR; and our new neuro in LA) tell us that seizures are an absolute possibility given Solly’s medical history and MRI, and that we should stay on an anti-convulsant as a precaution. So, for now, we are happily keeping Solly on Keppra, and we are thrilled that he is not having and has not had any breakthrough seizures.