Every once in a while, this roller coaster that we call life heads downwards. Nothing is wrong. It’s just that Solly, Bea and I have been sick with the ick for the better part of a month, which means I have less time to work on Solly’s stretches and exercises, and more time to focus on everything that we aren’t accomplishing.

When life gets like this, I feel a little down for a day or two, and then something as silly as a Facebook memory post knocks me out of my funk. Seeing a post from a year ago reminds me just how much he has grown up and come so far in such a short time. What a year 2017 has been!

We started out 2017 with the mindset that it was the year of change, a year to focus on alternative therapies and procedures as a means to propel Solomon’s progress.

Here’s what we did:

The end result from our year of change? Progress. Lots and lots of progress. Solly went from having no words to making LOTS of noise (he has about 20 words right now) and from not being able to take any steps AT ALL to taking several assisted steps.

He’s sitting up straighter and by himself for longer periods of time, he’s eating so much better and he’s now insisting on holding his bottle and using his own spoon with assistance. He’s made gains in so many areas!

I’d love to say that 2018 will be a low key year compared to 2017, but that simply won’t be the case. Our year of change showed us many things, but most importantly, it showed us the value in alternative and intensive therapies and the fact that we shouldn’t settle when doctors don’t believe in Solly’s capabilities. This means that in 2018, we’ll be traveling for more intensive therapies and to consult with different doctors and specialists. We’ll also be doing another round of HBOT (in Nashville this time, starting next week!), trying stem cell therapy, and adding an additional weekly hippotherapy session.

I think it’ll be a busy/fun/productive/unexpected year and we’re up for whatever the year throws our way. Stay tuned for updates! 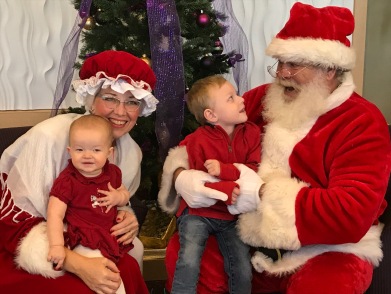 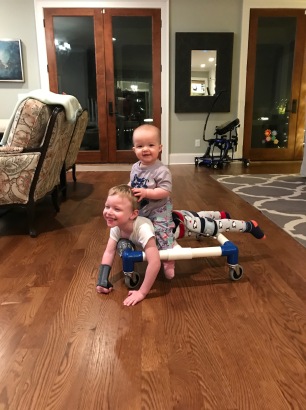 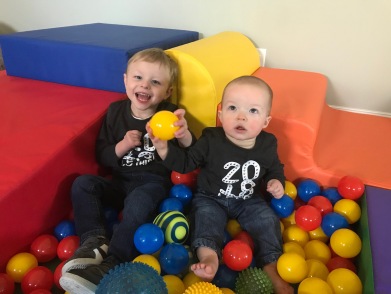