In my past life, I remember when I would have a bad day in business school or at work, my best friend Jenn would send me this:

In the months since I last posted, we have subconsciously applied this attitude to Solly’s rehabilitation. We’ve learned to take everything in stride, focusing on solutions for his recovery and not the fact that he needs to recover. Ok, ok, I admit it, sometimes I still freak out and over-worry about something related to his recovery. And when I say sometimes, I mean like once a week, which is a huge improvement over 6 months ago. But, for the most part, we focus on moving forward, no matter how slowly.

I think when I started this blog, I envisioned a Cinderella story, one in which the fact that a stroke took away half of Sol’s healthy brain tissue would not matter – he would recover to lead a productive, “normal” (I still hate that word!) life. And, he very well may. I think he will. I don’t have any bad news that would suggest otherwise. I just think that I was expecting progress and recovery to happen much quicker than it is and because I never had any huge milestones to share, I didn’t bother updating the blog.

So. Here’s what’s going on: Solly isn’t sitting entirely independently, he isn’t close to walking, he still isn’t using his right hand, we are still struggling with eating, he doesn’t have any words yet….basically, we are still pretty far behind in all developmental areas. That’s the unsugarcoated version of life right now.

However, we are seeing progress in all areas. In sitting, there are moments of brilliance where he is sitting up perfectly straight on his own for a few seconds before either his back extensor muscles kick into overdrive or his abs collapse. This is a big improvement over a couple of months ago. We’ve been working on walking in a gait trainer, a slow process, but he will now occasionally take reciprocal steps. We will be getting a gait trainer to work on this at home. We’ve tried some new things with his right hand, including e-stimulation, and are noticing that he is paying more attention to it and is trying to incorporate it when he eats. On eating, he is now eating three small meals a day, tolerating about 5 different types of food, and still getting the majority of his calories from Pediasure, fed by bottle. He is making strides on both an open cup and a sippy cup. For speech, just last week we had a speech evaluation and while we found out that he is behind in speech (duh!), the therapist had some great ideas on how to help him communicate. We are now on the therapist’s short waiting list to start seeing her twice a week. 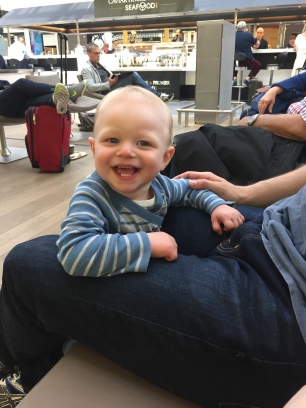