I thought it’d be appropriate to start out our story with a typical Solly greeting: “hi.”

It’s such a simple word for a 5 year old to say, but in Solly’s case, he wasn’t supposed to ever be able to say “hi” or any other word. He wasn’t supposed to see, hear, eat orally, or be independently mobile. At birth, Solomon – known to all as Solly – had 3 massive strokes which destroyed over half of his brain. It’s a miracle that he can say “hi”. It’s a miracle that he’s alive. Solly is a pediatric stroke survivor. I’m Camie, Solly’s Mom, and this is our story.

Rewind to October 9, 2014. It was 4 a.m., I was 39 weeks pregnant and my water just broke. I was in the worst pain I’d ever felt. I’d had a very easy pregnancy and was mentally ready to give birth to my first child – ready for the contractions, ready for the pain, and ready for the joy on the other side. I knew the pain I was feeling was not normal. We called our doctor and rushed to the hospital. After being admitted to Labor and Delivery and hooked up to the fetal monitor for just a few minutes, the doctor came into the room and said, “We need to deliver this baby. Right now.” Our baby was in distress and his heart rate was dropping fast. There wasn’t time for Mike, my husband, to change into scrubs and come back with me for an emergency cesarean. In fact, there wasn’t time for anything. The doctor quickly put me under to deliver Solomon, who was not breathing.

Fortunately, the hospital doctors were able to revive him within a short amount of time. We didn’t deliver at a hospital with a neonatal intensive care unit, so Solly was admitted to a special care unit for further monitoring. They assured us that once he was able to regulate his body temperature, he would be moved into our room.

Two days passed. During those two days, Mike wheeled me into the nursery for all of Sol’s feedings, so we got to spend some time with him, but we were anxious to have him in our room so we could snuggle and bond with him. The attending doctor called our room to let us know that he seemed to be on the mend, his body temperature was stable, and she was discharging him to send him up to our room.

Solomon had rapid eye movement. The doctor suspected he was having seizures and she was calling Georgetown University Hospital to send for an ambulance to transfer him to the NICU there.

Our hearts dropped. I was so upset that I couldn’t speak, tears falling uncontrollably, I actually felt like I was in a nightmare. I begged myself to wake up from it. I had an easy pregnancy. My baby was healthy the entire time. This couldn’t be happening.

After we were transferred to Georgetown, the neonatologist performed an MRI on Solly which confirmed that he’d had multiple strokes and his brain was swelling and covered in blood. The strokes were big enough that his brain had shifted to one side of his head. The prognosis was not good – they suspected he’d live his life in a vegetative state. It was a nightmare.

They hooked him up to oxygen, gave him a nasogastric feeding tube, and kept him on a warmer. They also attached what seemed like a million sensors on his head for a continuous electroencephalography (EEG) to monitor his seizures.

And then we waited. For days, we were unable to hold him, so we sat next to him, holding his hands, talking to him, reading to him, letting him know that we were there.

As the days in the NICU passed, things began to look up. After a couple of weeks on a heavy dose of phenobarbital, the doctors controlled his seizures and switched him to Keppra. He began to maintain his body temperature and breathe on his own. One of his nurses, Judy, began introducing him to a pacifier. At first, he let it sit in his mouth, but after a few days of work, he started sucking on it, and then he learned the suck-swallow reflex needed to eat orally.

After exactly a month in the NICU, we were discharged. As we were getting discharged, the neonatologist performed another MRI that showed the brain swelling had gone down and the blood receded. His brain was back at midline. The doctor confirmed that Solly had had three massive strokes and suggested that Solly would have some challenges, specifically with his gait, speech, and motor planning. However, he also said that the “MRI did not match the child”, meaning that had Solly had the same strokes at an older age, his outcome would have been drastically different. Because he was so young and his brain was so plastic, his brain was already rewiring itself, making it so difficult to predict just what his life would look like.

Fast forward to present day. Solly is a smiling and loving 5 year-old. He’s typical in that he’s a jokester, he wants to be independent, and he loves to be WILD. He gives the best hugs, likes to pick on his little sister, Bea, and laughs at any noise that sounds like a fart. As doctors predicted, he is delayed in all areas and when he turned 1, he was diagnosed with triplegic cerebral palsy, meaning his right arm, both legs, and trunk are weak and struggle to do what his brain asks of them. He isn’t walking (yet), has few words, and is totally dependent on us to do everything for him. While we started a standard regimen of physical and occupational therapies in the NICU and continued those therapies once we were discharged, once Solly hit 2 years old, we realized that Solomon was no longer responding to typical PT and OT appointments. We began exploring alternative therapies like Anat Baniel Method, Hyperbaric Oxygen Therapy, Hippotherapy, Aquatic Therapy, and intensive models with great success. We’ve seen so much progress in his abilities over the past couple of years thanks to these therapies. 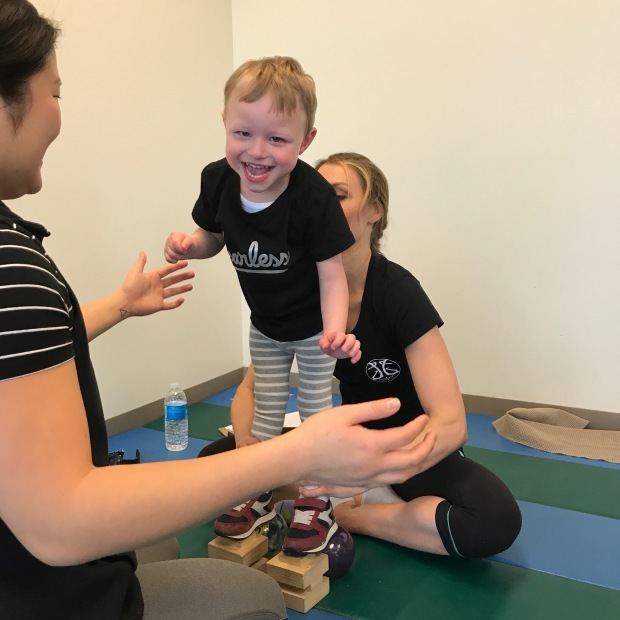 We don’t know what the future holds for our Solly, but what parent knows what the future looks like for their child – typical or not? All we know is that every day that we spend with Solly is one filled with love, happiness, and hard work. We believe that the sky is the limit for Sol and that he will do everything on his own timeline. Solly has already overcome so much in his life, he’s changed our lives for the better, and there is no doubt that he will have a big impact on the world.

Infant stroke is much more common than most people realize, affecting roughly 1 in 4000 newborns. Fortunately, an infant’s brain is much more malleable than an adult brain, so many times infants are able to recover and lead healthy and productive lives. We were fortunate that nurses and doctors recognized the signs of Sol’s stroke early on and were able to control the seizures, putting him on the road to recovery. He has been seeing therapists – physical and occupational – since he was just two weeks old. He is making great strides in his recovery and we have faith that his recovery will continue in such a positive direction.

This blog began as a way to keep friends and family updated while Sol was in the NICU. If you’re new to the blog, you can find those posts here and an explanation of his MRI here. On Sol the Man, we are now detailing Solly’s recovery, both to continue to keep our loved ones informed and also to provide hope and comfort to anyone else dealing with infant stroke.

Tuesday’s are Solly’s favorite therapy days: it’s pony day! Despite Solly being very wiggly and sensory-seeking today, Mali, Solly’s regular therapy horse, was cool as a cucumber and very much earned his post-therapy treat. ❤️ 🐴 (I also had to take a photo of therapy pony Lizzie, who Bea talks about non-stop. Bea is horse crazy like her Mama.) #hippotherapy #physicaltherapy #occupationaltherapy #speechtherapy #strokesurvivor #pediatricstroke #strokewarrior #apraxia #cerebralpalsy #cerebralpalsykids #cpawareness #hemiplegia #triplegia #lovehorses
It was a beautiful morning for a little hike. It’s been awhile since we’ve gotten the kiddos out on the trails and it feels so good to be back!
All those #quarantine memes from The Shining are coming true: redrum! . . . . Just kidding. It’s another day of messy fun at the Rodan’s with finger painting. #quarantinelife #stayathome
Anyone else in desperate need of a haircut? (This shaggy pup has a grooming appointment tomorrow: his Mama is not so lucky.) We had fun exploring a new-to-us park today. Getting away from the house did wonders for our headspace - even old man Bentley, who usually prefers long naps in his bed, enjoyed a change of scenery. ☀️ 🌳
Fancy an evening drive?
A perk to having an older brother who has a #disability: a house full of fun equipment and ALL. THE. TOYS. Life is harder than it should be for this little nugget, so we try to give her as much one-on-one time as possible and let her play and explore anything (equipment, therapy toy, bed) of Solly’s. ❤️ #specialneeds #specialneedsfamily #specialneedssiblings #playtime #toddlersofinstagram #toddlerlife
We were halfway through #teletherapy with @tbrown_7 before I realized that Solly and I were dressed alike. 😂🤦‍♀️ I’m not sure if that’s a Mama win or a Mama fail, but it gave me a good laugh today. #occupationaltherapy #builtnapastrong #strokesurvivor #pediatricstroke #strokewarrior #cerebralpalsy #cerebralpalsykids #cpawareness #hemiplegia #triplegia #napacenter #stayathome
Solly’s expressive speech has taken off in the 9 weeks we’ve been quarantined. I’m not sure if it’s the time we’re spending with him at home, a new CBD regimen we’re following, or the PROMPT supports we’re learning via our #telehealth sessions with @napacenter - or a combo of all three, but holy cow, this kid has opinions and he’s now letting us in on them. Whether it’s telling us “All done, good bye (to the movie playing on TV). On, Blippi!” or “Uh oh, Mama! Uh oh, Dada!” when he breaks something, typical for a 5 year old, we’re thrilled he can now tell us if he needs or wants something. This is a huge, amazing step for him. He’s also able to mimic almost any sound, so we’re helping him navigate his apraxia to find the words he wants to use. Here’s a video I took yesterday while we were having story time, just in time for #Apraxia Awareness Day today. ❤️ #builtnapastrong #strokesurvivor #pediatricstroke #strokewarrior #speechtherapy #cerebralpalsy #cerebralpalsykids #cpawareness #hemiplegia #triplegia #napacenter
It may be cloudy today, but our day was brightened when we got to see (from 6 feet away) @ellenseder from @napacenter!
Another day of play in the backyard and this little 🐝 is pretty happy about it. #quarantinelife
%d bloggers like this: