After Solly was born, we had a month-long stay at the Georgetown University Hospital’s NICU. There, the neonatologist had told us that in order to be discharged, we had to get Sol’s seizures under control and come up with solutions for his oxygen levels and feeding. Seizures were the easiest thing to get under control, followed by removal of all oxygen support. While we were confident that Sol would come home without any feeding support, some of his doctors were less-than-optimistic. I remember expressing some feeding concerns to one of his rounding doctors, a Fellow who was spending some time at Georgetown, and her exact words to me were: “I don’t think he’ll ever eat by mouth. He may be able to have some pleasure feedings by mouth, but he’ll probably go home with a g-tube.”

Less-than-optimistic, right? It was definitely not the kind of thing we wanted to hear.

Luckily, Solly is stubborn (just like his Mama and Dada!) and proved that doctor wrong, leaving the NICU a little over a week later without any feeding support.

However, since leaving the NICU, feeding has continued to be a struggle for us. Sol’s strokes affected his ability to coordinate muscles, including facial muscles, as well as dampened some of his sensory abilities. At three years old, he is still taking the majority of his calories in by bottle and eating some finger foods, but primarily favoring purées that he can eat by spoon or feed to himself with his fingers. We’ve been in weekly feeding therapy since he was one year old to address his muscular challenges as well as a few behavior issues. Progress has been slow, but entirely worth it, especially after we switched to a new, very experienced feeding therapist, Linda, at High Hopes in Franklin, TN.

Since Linda started seeing Solly this past September, feeding has sky-rocketed. She opened our eyes to many of the reasons why we were struggling with feeding and pinpointed things we could do to help Sol.

For example, one major issue with Sol’s feeding is refusals. For the longest time, we could NOT figure out why he was refusing every.single.thing we were offering him. The simplest explanation – one that I’d began to suspect over the summer, but Linda confirmed it – is that Solly suffers from chronic constipation, the result of not moving as much as a typical three year old and also not getting in a good amount of fruits and water. Our new solution was a daily dose of Miralax, with a goal of getting Solly to poop every or every other day. We also switched his high calorie formula from Pediasure to the plant-based Kate Farms. A couple of weeks on our new regime, we now have consistent poops and a growing appetite!

She also introduced a series of facial stretches that help bring awareness to Solly’s cheeks, tongue, and teeth. Doing these daily allow him to manipulate food and chew better. 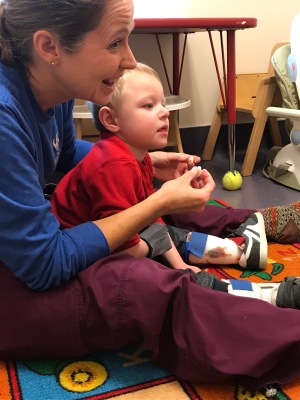 When we questioned why Solly feels the need to chew on everything (except for food), all day, every day, she explained that it’s a sensory need. Typically developing 3-year-olds get sensory input from running, jumping, stomping their feet, and generally being wild monsters. They also use their jaws to chew foods in a typical 3-year-old diet – like breads, meats, pastas. Because Solly is still working on taking steps and is on a puree-heavy diet, he can’t get the sensory input that his mind and body craves. So, he bites and chews on everything to try and fulfill that sensory need. He also is known to head bang and throw his body forward or backward, all for the same reason. To help prep his mind and calm his body for feeding therapy sessions, Linda works him through some stretching, massaging, bouncing, and stomping before she turns the focus on eating.

The result of all of the above? Pure magic.

Within one or two feeding sessions, Solly began happily accepting a wide variety of purees from her by spoon. He’s since progressed to holding his own spoon with Linda’s help, hand over hand, and in the week before Christmas, he began taking tiny bites of, chewing, and swallowing cheese and ham.

It might not sound like much, but for two parents who were initially led to believe their child would only ever eat through a tube, we now secretly do a Snoopy dance every time we see Solly make these inchstones in feeding.